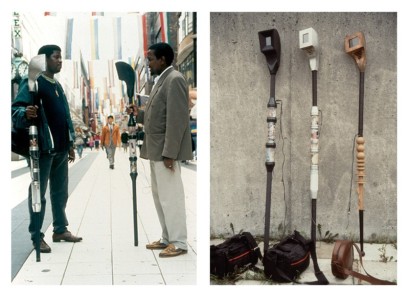 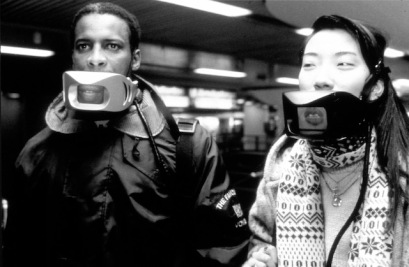 I was first introduced to the work of Krzysztof Wodiczko, in 1998. I spent my time as an undergrad at Concordia University re-using, re-working, and rewriting essays about him. I was fascinated by his work and with access to the Internet today, have come across smaller details about his personal life. He is an important figure (past/present/future) in using Art/Design and Technology, but he is also a visiting professor at the Warsaw Department of Social Psychology, and a professor at MIT since 1991. In 2002, I was able to have a brief discussion about my essay with my professor Tim Clark, who had personally known him and worked on a project with Wodiczko, who first emigrated to Canada from Poland in 1977.

Wodiczko is well known for his politically motivated, large-scale, video projections on monumental buildings and surfaces, throughout the 1980s and to this day. What intrigued me most during my studies, were his philosophies and use of commonplace and modern technology, readily available during that period for works that focused around ideas of Xenology and the identity of the immigrant(or ‘other’). Works such as Alien Staff (1992), and Mouthpiece/Porte-Parole (1993), both utilized digital technology, such as a display monitor, speech recorder that could be manipulated to speed -up/slow-down or change the sex of its users voice, to address communication and the public sphere of an Ethnic Minority. Immigrants have in the past been referred to as “aliens” that migrate to foreign lands. They cannot easily assimilate and blend in to a culture where they appear as “other”. This is prevalent to what countries all over the world are facing even today, with high immigration and migration of refugees. Of course there is also a looming doom on the rise of Nationalism, predominantly White Nationalism, that brings Wodiczko’s work back to mind. His beliefs about the consequences of global capitalism and conflict created by the unfair distribution of resources and opportunities, focus around the political landscape of the marginalized.

Alien Staff, was designed so that the person carrying the object in public, could communicate a story of his/her history to any passerby that was interested in approaching the user. The staff itself is something that would draw attention and would be hard to ignore in a public space. If a stranger approached the user, they would then start asking questions, opening up a dialogue. Atop the staff is a mini video monitor with pre-recorded footage of the users face, narrating stories about his/her past life experiences, to “humanize” them and replace notions of otherness. Juxtaposed to the physical person carrying the staff, was a way to close the gap between a version of “us” and “them”, as well as time and space.

The implications of his work have remained with us to today, which back then could have been an insight to the future. In history, art has often been a way for us to look back at the social discourse and climate of that specific time period.

Today, although there is still a strong plight of “us” vs. “them”, there is an ongoing dialogue in the general community about how we can close this gap. How we can represent each person as their own individual without having to regard them only through stereotypes, prejudices, or assumptions. The global market is more open because of the Internet and the access we have online. The world’s history has always involved immigration and belonging, and it will continue to do so. Rather than focus on the negatives, there is a future(present) of technology that opens up culture. We are able to translate foreign languages to our native language online. Babel Fish (the original online translator) has introduced Babel Fish earphones through Google. You can experience nearly real-time translation by having someone speak their language into the speaker on your phone, and have it translate into your native language back into your earphones… giving the ability to have an open dialogue in real time.