The FUTURE SHOCK Of Alvin Toffler 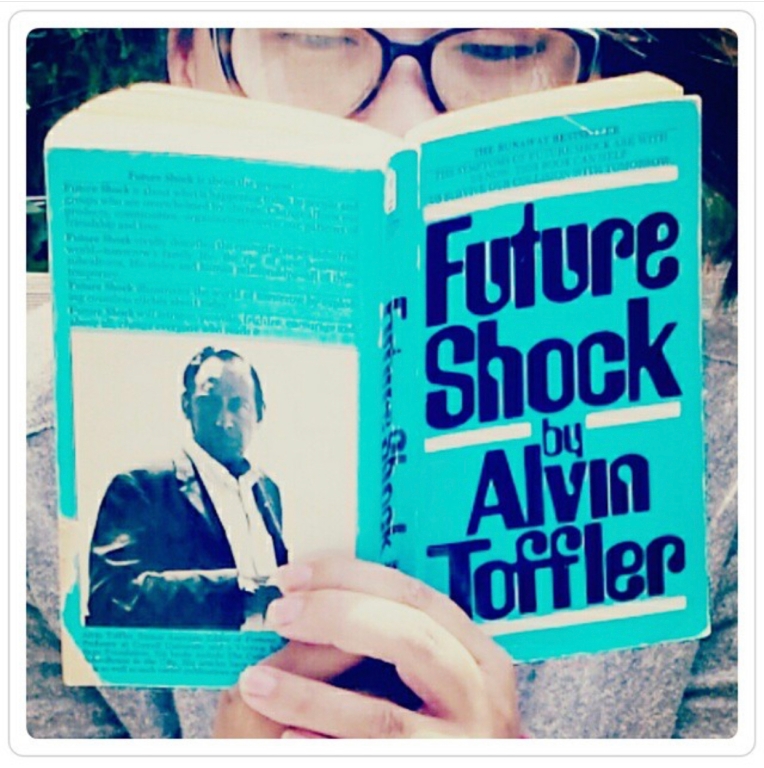 Published in 1970, Alvin Toffler’s book Future Shock, is a foresight into the future which has unravelled to be the truth of today. It is as relevant today as it was decades ago at predicting the economy, technology, politics, and socialization of this generation and the adaptability to the process of change. The term “future shock” is applied to our human response to overstimulation, simply the rate at which we can adapt to the acceleration of change. He even questions what the progress and determination will be for the mental health factor of “techno-societies“.

I recently came across an article about “Computational Psychology,” a relatively new field of study that uses digital technology to research the behaviours of, for example, borderline personality disorder. Although I do not agree with the process of the research they are conducting due to the bias of “psychotherapy”, it is a sign that the field of psychology is advancing to address technology and its impact on mental health. (Of course it is just the term I am interested in as the study itself is not an actual representation of what the field of psychiatry could be studying in terms of the impact and practical uses of technology). As I’ve stated before, the initial response is to simply, “get off” our devices. The rate at which we, in society, are experiencing the global impact of change on all levels of environmental, economic, technological, psychological, societal and political change, to name a few.

In the 1980s-1990s, during the rise of foreign global economies, Toffler met with many foreign dignitaries, especially from Asia. He had a strong influence on China and South Korea, at the time having meetings with Kim Dae Jung (S.K. president 1996-2002). ] Kim Dae Jung was on a path of using Toffler’s writing and applying it to the future of South Korea, as a player in technology and the information age… the so-called “Third Wave” for an established economy that does not ignore the concurrent events of social or political change. [As a side note: My father, has a letter written by Kim from 1971, which he was given when he was a member of the KCIA] Nations such as South Korea and Japan are dealing with the future today by their emboldened leverage of technology, while the rest of the world is trying to catch up.

Toffler’s “predictions” in Future Shock, as well as many of his other books, have come to life in the 21st Century. The decay of social relations, the demands of social justice, the psychology of humankind, the waste of fast fashion, the speed at which tech is changing (think Apple); there is this incessant need to keep up with all the change happening around us. The change is similar to the rate of the online algorithm and how fast it reacts to your online use. The latter is as fast as the pace at which a person with psychosis (let alone a mentally “healthy” individual) can keep up to date with the racing of their own thoughts. Combine psychosis and the acceleration of online algorithmic change/dialogue and you get information overload and paranoia. This is one aspect of the mental health factor Toffler could have been questioning in his vision of a “techno-society.” At least that is my perspective having experienced this interchange personally as an individual diagnosed with psychosis, fully being aware of my capacity to function while being in a mental state of dysfunction, online. It becomes information overload. The result is an inability to distinguish ones reality as separated from physical and virtual, upon which delusions can be formed based on some underlying truth.

The mental state of today’s younger generation is heavily influenced by Internet usage, especially with the many platforms of social media. They are bullied, they are influenced (pos or neg), and they engage in a way without privacy. There are often news stories of the latest violence reprimanded via sharing online shootings, suicides, self-harm… the list goes on. How do we keep up today (for tomorrow) with the epidemic of mental health care in which the digital age is heavily used as an instrument to spread information? Do we share more resources on prevention? Do we call out the corporations for more censorship? Or do we study a new discourse on mental health/illness for future generations immersed in online culture?

Personally, I do hope we pave the way for open communication on how to observe mental health, without just the simplicity of “take a break” and “get outside”. Although that is a key facet to staying mentally healthy, I want to know about how online culture triggers new ways to look at and study mental health care. New definitions and new boundaries on staying healthy online. Virtual Reality is already being used as a device to help stabilize people with addiction through simulated situations. For me, virtual reality of my own doing through actions on social media, helped me manage a lot of my psychosis triggering delusions, as well as cognitive healing. Wouldn’t it be great to have a guidebook on how to stay sane in the 21st Century, while embracing the acceleration of digital change. Alvin Toffler gave us foresight, now it’s up to this generation to continue that insight.